Approx. 1'500 international companies were exhibiting at IPM 2018 and more than 54'000 professionals of the 'green industry' visited the partly new designed exhibition area. One more time the IPM underlined its position being the leading fair for the horticultural industry worldwide. The organisers were able to pull an interesting mix of novelties, special theme displays and presentations of experts together. We would like to introduce some of the developments of our industry in that blog contribution.

Hortivation - the special trend exhibition of the 'green industry'
For the first time Hortivation took place in 2017. At that time organised in a small exhibition hall close to the former nuclear plant Kalkar not far from Düsseldorf. The content shown at that time was well received from all decision makers and the idea was born to organise this show in association with IPM. Hortivation wants to show the trends of our industry. Amongst a lot of other very interesting topics the following product lines where shown and discussed:

These products were shown under the following 'trend-umbrellas':
• Family Garden
• The New Gardener
• Eat your Greens 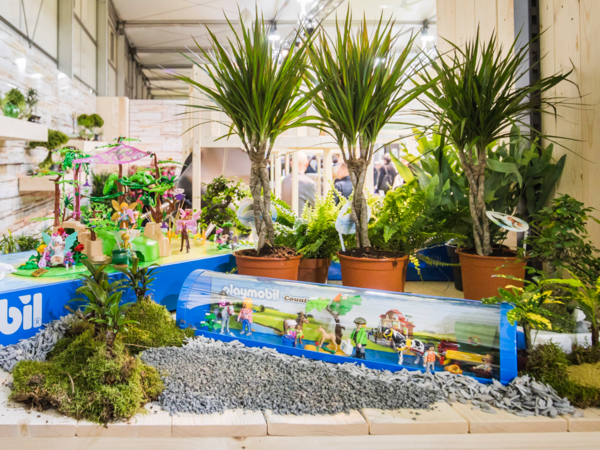 An example of the trend exhibition 'Hortivation' - combination from mini-plants and toys
(Image: Messe Essen)

Breeding novelties
The power of innovation amongst European breeding companies is significant. Every year a lot of novelties are introduced to the public during IPM. The best breeding results received awards as 'the novelty of the year'. Please find below some of the winners 2018:

Some of the novelties which won an award:

Digitalisation in the horticultural industry
Despite the topic of digitalisation is very hot in all industries and the public, almost nobody emphasized this topic during IPM 2018. Just a few exhibitors integrated 'digitalisation' as such in product developments or just to use digital possibilities for gaining more attention. We would like to introduce two examples we came across IPM:

Stauden Ring - Augmented Reality
Following the motto 'Grey – the NEW Green' the grower association Stauden Ring gained a lot of attention at IPM by promoting the 'most boring booth on IPM'. The very provocative exhibition stand contained 'stones' only - no plants. In the first glance a very strange approach, promoting a company that is dedicated to perennial production and is offering thousands of varieties.
The sales people on the stand invited visitors to take an IPad and experience augmented reality. As soon as the IPad was recognising the lettering e.g. of 'langweilig, oder?!' on the IPad a sea of blossoms occurred. The visitor was able to experience living green rather than concrete.

TEKU-Pöppelmann - RFID solutions
By adding a RFID-tag to a tray and link it up to a reading device allows efficient product registration during picking processes or stocktaking. Furthermore it is possible during loading plants on a truck to check, if the packing list are inline with the real goods ready to deliver. Mistakes can occur at any time and can be solved prior to any customer’s complaint by using RFID technology. Unfortunately RFID is rarely used in our industry, but TEKU is one of the first movers.

It is always very worthwhile visiting IPM. We highly recommend to safe the date, which is from Tuesday 22nd of January 2019 until Friday 25th of January 2019.
Author: